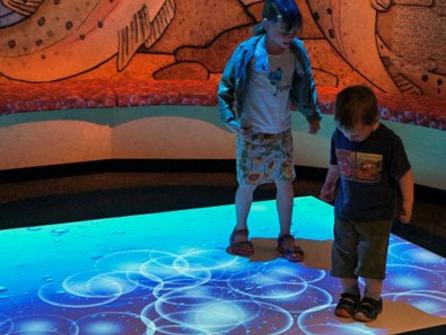 It’s a basic fact of raising children in the 21st century that they’re going to indulge in video games from time to time. Even if you’re the kind of parent who believes in restricting your child’s screen time, it’s hard to know what they’re up to when they’re at school or when they’re spending time with their friends. Most children are attracted to screens and video games, so they’ll try to indulge in both any chance they get. The problem that most parents see in this is that video games can be a very isolationist activity. Most children focus so intently on the games they’re playing that they don’t interact with the people around them. This can hurt their social skills, which in turn can slow the development of their child.

This is why it’s so great that companies like FX Game Zone have developed floor games systems. A floor game system is a type of interactive video game where the game is projected onto a floor. These games vary in size, but they can be as big as many feet by many feet, and they can take up an entire room. They’re video games in the sense that children are interacting with things on a screen, but instead of interacting with a controller they’re able to do so with their entire bodies. For example, there are floor games systems where the child runs around the screen stepping on flowers that change whenever the child steps on them. Watching children play these games is a joy, as they run around laughing and interacting with other children who are playing the game.

These types of games not only keep children active and on their feet, something that’s in complete contrast to more traditional video games, but they also help children develop their social skills. Most floor games are designed to be played by groups of children. The game where you step on flowers, changing them from one color to the next, is meant to be played by a group of kids. Thus, even though they’re playing a video game and indulging their desire to interact with a screen, they’re doing so with their peers. They have to talk to one another while they play, they bump into one another, and they learn how to cooperate. Interactive projectors are great for kids because they let them play video games while also interacting with other children and learning how to communicate with one another. They’re video games that also help children to develop in a healthy and productive manner.

If this kind of video game sounds great to you as a parent, then you should either purchase a system for your own home or visit a place where these games are available. You can see in person how they help foster social development in your child while also allowing them to do something that they truly enjoy. They’re a wonderful invention. It’s actually quite shocking that nobody came up with the idea before.